Trying to wrap up last year, and talk about this year is kind of ridiculous!  Especially when I'm already running 900 mph, in 5 different directions.  Good thing I'm not a quitter!

I think I have you caught up on the crazy Spring season of 2015.  I hope it is never repeated in my entire life.  It was hard, and while I might know a few things that would help me if I ever had to endure it again, I don't wanna go there.  Ever.  Again.

Once we managed to survive the spring, the honey build up began.  It took a while to get started, but once it did, things were moving fast.  In a moment of panic, I had to move my largest hives.  Moving hives is zero fun.  Moving large hives is negative fun. It is hard.  It is stupid.  It also requires friends to show up and get to work.  Luckily I am very blessed in the friend department. The Blue Dog Bee Lady pulled one night with me, and Lilly Point Farm pulled another. Plus, my Full-Timer, who is now my No-Timer, showed up for a shift.  It really was our last ditch effort for a honey crop, and in the end it paid off.

On top of getting the bees ready, we had an additional task in 2015 for honey harvest.  We set up our own extracting equipment for harvest.  The first task was cleaning our space.  My bee shop was a catch all for a ton of activities.  No more!  The next task. Insulating and air conditioning the space.  I do live in Texas.  It is hot in Texas.  It took me three days to get the space insulated.  I would go in the attic at about 6:00 in the morning, and I was only able to stay up there until about 9:00.  It was so stinking hot.  I would come down and be completely drenched.  It did not help that I had to wear long pants, long shirt, a breathing mask, and gloves.

The air conditioning was a little easier with the purchase of a portable unit.  I was hopeful it would be enough to keep us cool, and in the end, pleasantly surprised at how efficient the unit was.  Once we had everything in place, we waited, and waited, for the honey.  Those girls took forever to cap the honey last year.  We were also pushing the limits for the Snow On The Prairie bloom.

You have to harvest before the Snow blooms!

Talk about being under some pressure.  The first bee yard we tried to harvest was miserable.  Of the twelve or so supers in that bee yard, we were only able to harvest two.  Talk about a little nerve wracking.  It was an excellent trial run for our new equipment because we quickly realized we needed to change a few things, but I was very worried about our prospects.

The second bee yard went much better.  We pulled more supers and our equipment set up was much more functional.  We did start noticing a problem with a product we were using to help get the bees out of the honey supers.  Problem being, it wasn't working!  This led to a lot of hand brushing bees off of frames of honey.  They don't really like that.  Facts are, I don't really like that.  Plus it added additional time to the entire process.

Once harvest season started, there was no stopping it.  I had four bee yards to harvest.  Some I had to harvest twice because the girls just weren't getting the honey capped.  The Blue Dog Bee Lady had a bee yard to harvest.  Plus, I assisted all my students in their first harvests.  It became a maddening, non-stop race.  A race that did not include adequate sleep or nourishment.  I was getting up at 6:30 in the morning, and most days not getting back to bed until 1:00 or 2:00 the next morning.

On top of sleep deprivation, I was not eating quality food.  It was quite ridiculous.  I knew it was getting scary when I went to take a power nap one day, and completely forgot I left a pot on the stove with water and a tea bag on full boil.  You can imagine my surprise when I woke up.  My first thought, "Who's cooking?"  You know, because I could smell the tea bag burning!  Then my next reaction, to shoot out of bed in a sprint to the kitchen!  Where I found a pot completely ruined, with the remnants of a tea bag burnt to the bottom of it.  Only funny part about that experience was when the Man in Charge came home and asked me why it smelled like marijuana in the house.  I was hoping to avoid the whole "I almost burned the house down" conversation, but instead, it seemed much better then him thinking I had become a pot head.  I think in the end, he agreed.

My next real wake-up call about 2015 Honey Harvest came one day when I wore four contacts all day long.  Yes.  Four contacts.  I had been to the eye doctor, and I had several pair of trial contacts to use.  Apparently, I forgot to take out my contacts before falling in bed one night.  Upon rising, I just stuck a new pair of contacts in my eyes.  It was one of my all-time dumbest moments ever.  I kept thinking to myself, "Man.  I must really be tired!  I can't focus for crap!"  It wasn't until 1:00 in the morning, standing in the bathroom, trying to pull my contacts out that I realized my mistake.  I only realized it when I pulled three contacts out of my eyes.  Yes.  Three.  I spent forever looking for number four once I realized what I had done.

This prompted a quick visit to my eye doctor the next day.  First, to see if I had a contact hiding in my eye.  Second, to have him look to see if I had damaged anything.  This visit brought on a lot of questions from my doctor.  No, there was no missing contact. Yes, I had scratched my eyes.  Then he placed me on restriction for three days...no contacts!

The whole process of honey harvesting took nine days.  Nine long days of running like crazy.  Plus, it was the first stretch of 100 degree weather in the great state of Texas.

Somehow.  For some reason.  After it all ended.  I got up at 4:00 the next morning and drove 5 hours to buy a baby goat.

The goat just made perfect sense. 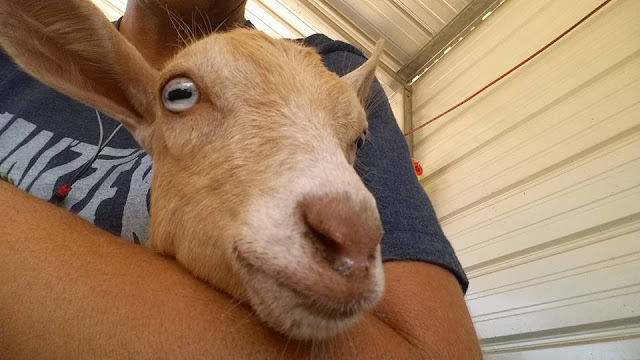 You should know I made this a day trip.  I came home at midnight.  I spent forever getting my new girl settled in.  Then I promptly crashed.  I had a bee lesson early the next morning.  I woke up to a garage full of water.  My water heater went out.  I really just wanted to leave and go buy another goat.
2 comments: